After a series of complaints from anti-paedophile activists a Labour spokesman said they had suspended his membership only last Tuesday. However, another spokesman for the Labour party informed us that “He could not be expelled immediately because party rules require an investigation by officials.” 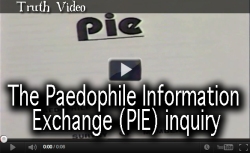 Mr O’Carroll, 70, is the former chairman of the Paedophile Information Exchange, Pie, which was formed in 1974 to campaign for sex with children including decriminalising intercourse with those as young as four.

In 1981 he was sentenced to two years in jail for “conspiracy to corrupt public morals” after police had seized more than a quarter of a ton of child abuse images. Some showed pictures of a man raping a one-year-old boy.

In 2006 he was sentenced to two and a half years in prison for distributing child rape images. The BBC reported: ‘Children, mainly boys and some as young as six, had been filmed and photographed being raped and tortured.’

He re-joined the Labour party after his release and wrote a disturbing piece about the role of child mascots at sporting events.

He said they ‘must look the part… be lean, well-proportioned, athletic and good-looking’, with ‘every suggestion’ that they have ‘been favoured by the gods.’

Mr O’Carroll was on the NCCL gay rights subcommittee and had addressed its conferences. In 2014 he made headlines by revealing then

Labour Deputy Leader Harriet Harman and former Cabinet minister Patricia Hewitt’s support for Pie by being affiliated to the National Council for Civil Liberties (NCCL) in the 1970s.

Ms Harman refused to apologise for NCCL’s connection to PIE and for putting recruitment adverts in PIE’s house magazine.

Mr O’Carroll told reporters he had no comment on his relationship with the Labour party.